New project by Jurita and Olegs Caupjonoks a series of artworks “Zodiac Signs in Art Painting”. Artists who create work together and be based within England. The original idea called “Body Energy” included only a couple of artworks. But everything changed after assistant Oleg offered his new vision of this project. The innovative and relevant ideas he suggested were inspired by his visit to contemporary museum in Los Angeles.
As a result, a completely new project “Signs of the Zodiac in Art Painting” was born. The process of creating paintings is quite complicated and time consuming.
3D Relief Sculpture painting: Mixed Media Clay & Acrylic with added Jurita artist’s own ingredients included, varnished. Style can best be described as “sculpting with paint”. 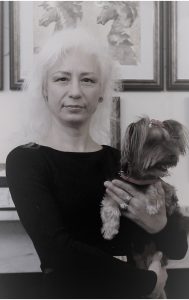 Jurita is a web design professional who is devoted to the arts. Having earned a Certificate in University of Tel Aviv, she continues to learn about Fine Art and design in University of the Arts London and  on courses throughout London and Europe.
Jurita constantly practicing painter, works in the genre of landscape, animalistics, still life. Studied 2016-2017 Art class british artists Carol Baker and french artist Francine Baker. 2018-2019 in Art class Royal academy of Art in London. In current time since 2016 takes lessons in painting, drawing, composition from estonian (former USSR) artist Sergey Minin.
She founded LADY JU GALLERY in 2016 and has since been involved in the development of the gallery and the integration of new technologies in the art field. Her experience working in galleries includes liaising with artists and their representatives, sales, social media promotion and organising exhibitions. She is inspired by working with artists – their passion fuels her own.
In February 19, 2019 Jurita received recognition for her NASSA work at the Parliament of the United Kingdom og Great Britain and Northern Ireland, when she was named as one of the UK’s Points of Light by The Rt Hon Stephen Timms, MP.
Artist’s Jurita’s painting belong to private Art collectors. 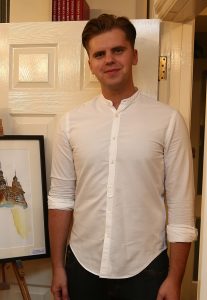 Olegs Caupjonoks, Gallery Assistant, Social Media Coordinator, is a communications consultant with an extensive experience in Social media as well as Corporate Communication.

He has studied PR & Communication while pursuing his passion and interest for art. Olegs enjoys working on various marketing initiatives, promoting artists during their representation and integrating contemporary art into the fast-paced social media world.

Originally from modern-day urban London, he appreciates both East European and western art and is working toward strengthening the connection.

Olegs and Jurita artists incorporated aspects of the “real world” into their canvases in Horoscope Art Series.

Art Auctions & Private Sales – Artwork from private collection New project by Jurita and Olegs Caupjonoks a series of artworks “Zodiac Signs in Art Painting”. Artists who create work together and be based within England. The original idea called “Body Energy” included only a couple of artworks. But everything changed after assistant Oleg offered his new[...]
View Calendar
Add